From the moment we enter the New Town Theatre foyer, we are subtly introduced to the Japanese culture that infuses DEN Entertainment‘s production of The Sake; a polite stand of elegant promotional postcards, cute origami flyers, and silken trinkets is manned by smiling producer Takumi Tasaki, dressed in traditional looking Eastern robes.

This is a delightful show, which follows the seasonal processes that create the perfect sake (a Japanese rice wine), through gentle clowning,  music, aerial dance, living projections that paint the entire set as if were a parchment, and a combination of traditional and contemporary Japanese performing arts forms.

Our host is Toji (Daisuke Fujiyoshi), the sake ‘brewer’, whose nose is rouged for more reason than one as he tipsily enters before the house lights fade, clasping his bottle, and offering drinks to members of the audience.  He introduces us to the cultural place of the ‘heavenly sake’ with humour and lyricism, then transforms himself into the altar at which it is brewed with a witty roofed hat to top his elaborate costume.

Executive Producer David ‘Junya’ Yamada comes from a background of fashion performance, and this course of a year is mapped through a strong visual emphasis.  The projections, which appear first on the paper-like wall hangings at the back of the classical British theatre, seep throughout the performance into other elements, even dancing with the performers themselves.  Surtitles, in Japanese calligraphy and English, announce the changing seasons and their relevance to the sake brewing.

Spring brings cherry blossoms, and a traditional dance of ‘Nihon Buyo‘ from Amy Den Ruth that sets the pastoral scene.  Musician Akira Sunrise plays a delicate inverted metal dome of hang drum, whose Eastern notes herald a change in weather.  I’m reminded of a segment from Frederik Schodt’s book on the first cultural exchanges between Japan and the West, and how their music jarred hideously against European and American tastes.  Luckily we have a wider cultural repertoire now, but the different melodic sensibilities still conjure a mystical otherness in my mind.

Glam-punk rock guitarists join Sunrise in the band corner at the back of the stage, and Kumiko Wakaida and Takuya Kojima appear in fluttering scraps of fluorescent fabric that glow under a UV light.  They perform handstands across the stage and whirl around on aerial straps, spinning a Spanish web and breakdancing in the embodiment of a typhoon.  Under the full lights, their costumes seem a little cheap next to the pristine detail of everything else we’ve seen, but perhaps their discord is intentional. 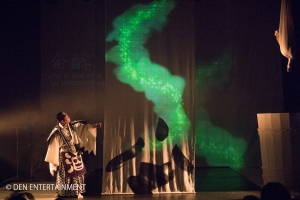 The Sake does’t tell a story as much as offer a multi-sensory representation of natural alchemy.  From chanted prayers the rice appears to grow, and then Ai Yoshida is the harvest, poured from from a sack in a bungeed spinning harness; I feel queazy as I watch her hurtling round and round on varying axis. She’s steamed in a silken sling above a fiery pot, and the Toji works his magic.  He conjures up the illusionist Koji, dressed in an intricate suit of black and white sigils, who proceeds to spirit his tools from out of moving projections, and send images flitting from one realm to another at his command. The fermentation is psychedelic rock, and now the mood is lightened as Toji prepares a volunteer samurai to chase the ‘mouses’ away. (A few small typos on surtitles are easily forgiven). There’s an underlying echo of the classical form of circus that intersperses spectacle with clowning and audience engagement here.

Aimi Hasegawa emerges as the liquid sake, sinuously evocative, creating her own elegant spin on aerial silks.  Although the number is not about ‘tricks’, she does pull out the most extreme oversplits I’ve ever seen.

As the sake is aged through winter, Den Ruth reappears as the spirit of the season (temporarily filling the role of Butoh star Kotoomi Hanayagi, who is still on his way from Tokyo).  There is a ritual offering, and live stereo effects of whistling flute, bamboo beats and vocal grunts.

Time has flown. Has it been a year already? Is the sake good?  More audience members are required for the celebrations, and yes, The Sake is good.  Very good. Rather more zen than we are used to, but circus is big, and widening its scope all the time.

Want email updates straight to your inbox? Sign up here!

My pre-order arrived in the post, reminding me that I did (do?) have a life outside of new-parenthood!
#circademic

Dear circus colleagues (especially those who've said to me "but just where is this going?" in the last few months) - now is your chance to contribute to the future of @CircusUp - what do you want in a support network? How can you envisage it working? Could you help in some way? https://twitter.com/Mimbre_Acrobats/status/1412015149288919042

Join the @circusup conversation on 20 July & help create a Sector Support Network that works for you. Whether you're looking for rigabble rehearsal spaces or wondering where to meet programmers & venues to book your shows,bring your questions to the table: https://bit.ly/2SIjb6R

📣Registration is now open for this FREE online conference July 9-10 all about funambulism, the art of wirewalking with a balancing pole. All are welcome! Register and find the full programme here: https://bit.ly/3dg4mj7